The American aircraft manufacturer Textron Aviation, owner of the Cessna and Beechcraft brands, is in the midst of a flight test campaign of its latest Cessna 408 SkyCourier. Discover with Menkor Aviation this new aircraft.

A successor to the C208 Caravan designed for Profitability

Unveiled in 2017, the Cessna 408 SkyCourier is a high-wing, fixed-gear twin-turboprop. The American aircraft manufacturer has the ambition to establish itself in the utility aircraft market with this new model. It is positioned in a segment occupied by the Twin Otter and the Dornier 228.

The SkyCourier succeeds the C208 Caravan, the versatile turboprop that has made Cessna famous since the 1980s. It was designed as a cost-effective aircraft dedicated to regional rotations, as evidenced by the aircraft manufacturer’s promotional sheet: “Load, fly, unload and repeat, and watch your business grow. “

By designing it from scratch, Cessna has done everything to ensure that the SkyCourier offers superior performance and lower operating costs than its competitors.

Two variants will be offered to buyers. A version dedicated to passenger transport will accommodate up to 19 passengers, it will be equipped with large windows and separate doors for crew and passengers. Another cargo version will allow the transport of three LD3 containers or 6000 pounds (2722 kg) of payload. This version will have a cargo door measuring 2.20m x 1.75m and a 1.78m wide cabin with a flat, rolling floor.

The two Pratt & Whitney Canada PT6A-65 engines give the SkyCourier 1,100 horsepower (820 kW) of thrust. It will be able to cruise up to 200 ktas (370 km / h) with a maximum range of 900 nmi (1700 km).
The simple cabin design will provide a lot of flexibility for future operators. They can modify it intuitively to change the configuration.

The fixed landing gear and the lack of a cabin pressurization system make the SkyCourier a light aircraft with low fuel consumption. A single refueling point makes it possible to refuel quickly and accelerate the rotations of the aircraft.

The cockpit is equipped with the Garmin G1000 NXi avionics suite. Cessna has chosen to equip its entire range of piston aircraft with this modern suite. Very intuitive, it allows a single pilot to operate the SkyCourier for freight transport. 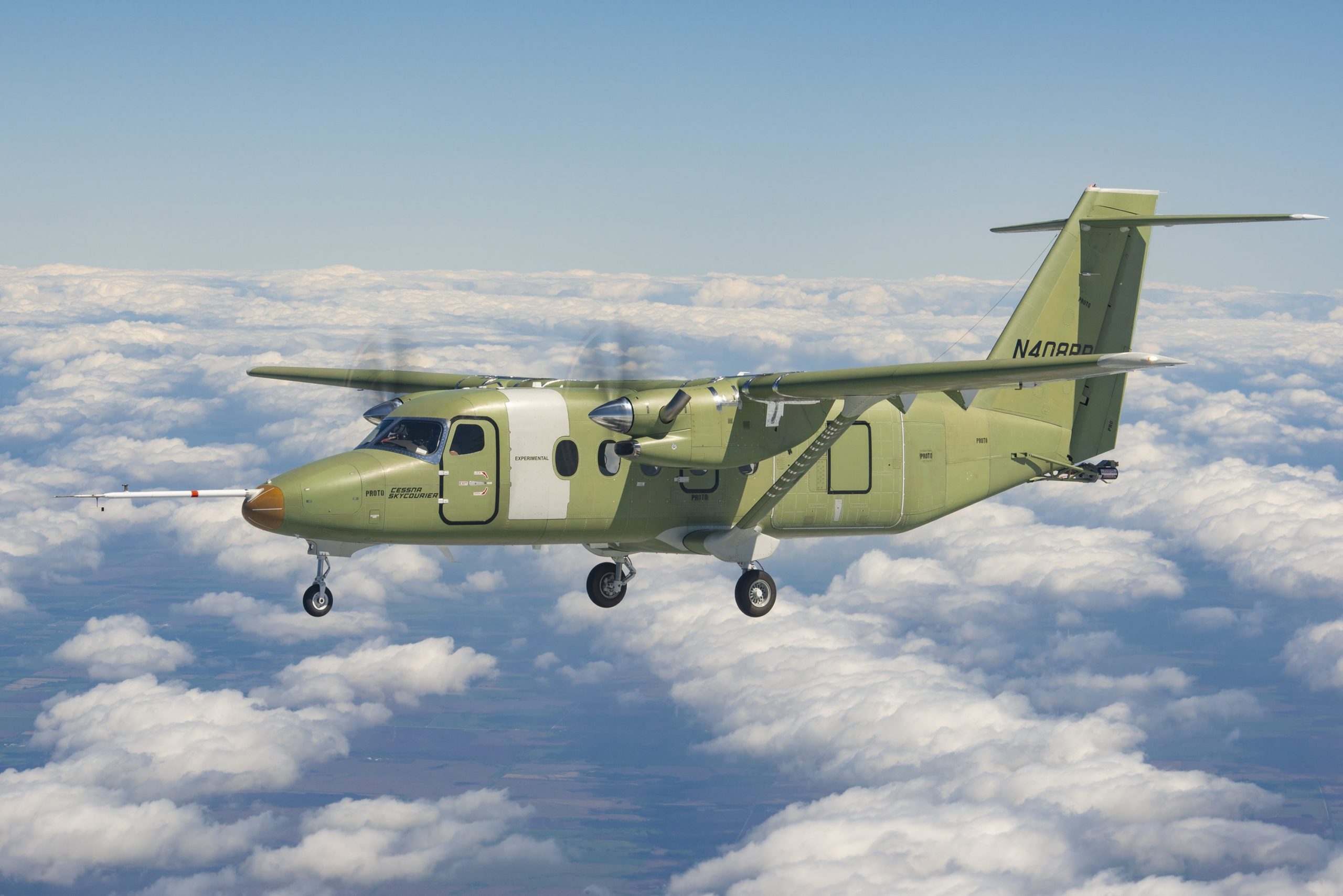 After being unveiled in 2017, the SkyCourier quickly completed wind tunnel testing in March 2018. The date of the first flight was delayed by the COVID-19 outbreak. Originally scheduled for 2019, the Textron Aviation teams finally managed to complete a first flight on May 17, 2020.

“I’m proud of the way the team has persevered through disruptions caused by the COVID-19 global pandemic and remained focused on getting us to this point. The Cessna SkyCourier will be an excellent product in its segment due to its combination of cabin flexibility, payload capability, superior performance and low operating costs. Our customers will be very pleased with what they experience from this aircraft.” said Ron Draper, president and CEO, Textron Aviation.

The aircraft manufacturer has continued its testing program with a second model since August 2020. This latest aircraft focuses on testing systems such as avionics, environmental control and anti-icing. A  total of 5 models are planned for the Cessna 408 SkyCourier flight test campaign.

FedEx Express will be the launch operator for the SkyCourier. This new aircraft was indeed developed to meet the American giant’s requirements. The international freight transport specialist is a loyal operator of the Cessna 208 Caravan who wants to modernize its fleet.
This first order is about the purchase of 50 SkyCourier Cargo and options for 50 more. The first deliveries are scheduled for 2021.